“Hats off to singer-producer Georgia Mancio for this world-class week of international jazz vocals.  Karin Krog (Norway), Maria Pia de Vito (Italy) and David Linx (Belgium) were all worthy choices but tempting Rebecca Parris back to London for the first time in 14 years was a masterclass.  The Boston doyenne gave a masterclass in the art of jazz singing.” 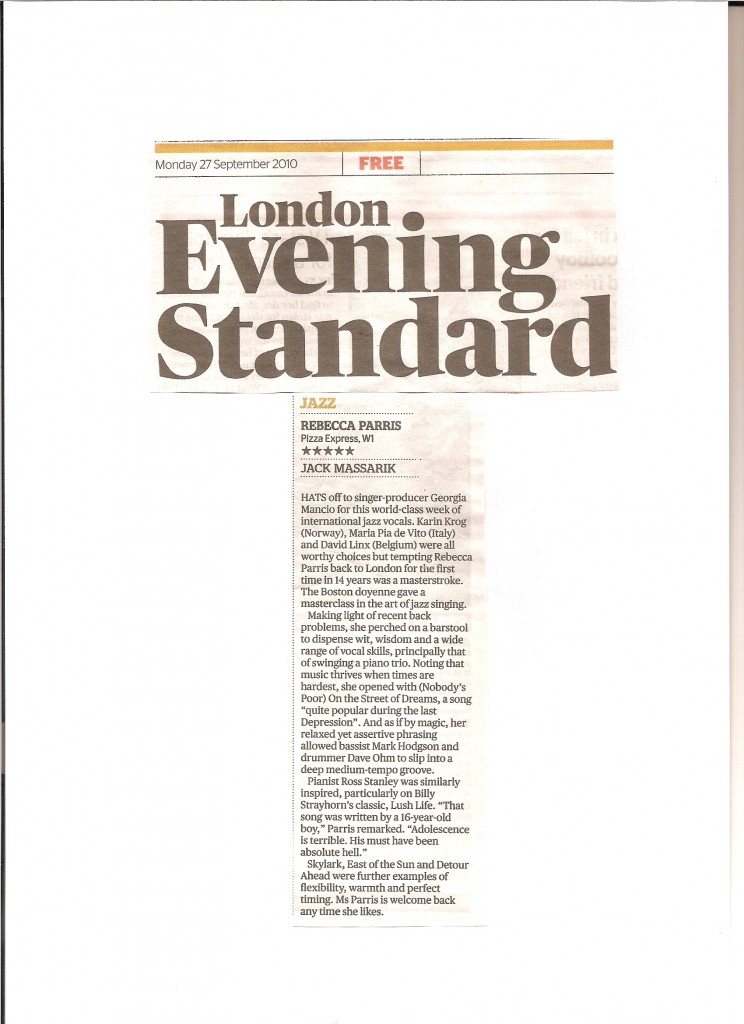 “Karin Krog is to Norway what Cleo Laine is to Britain…so it was something of a coup for…Georgia Mancio to persuade Krog to return to her musical roots….Krog’s stage presence is charismatic and assured, with a glint in her eye and a constant sense of the music being fun to perform” 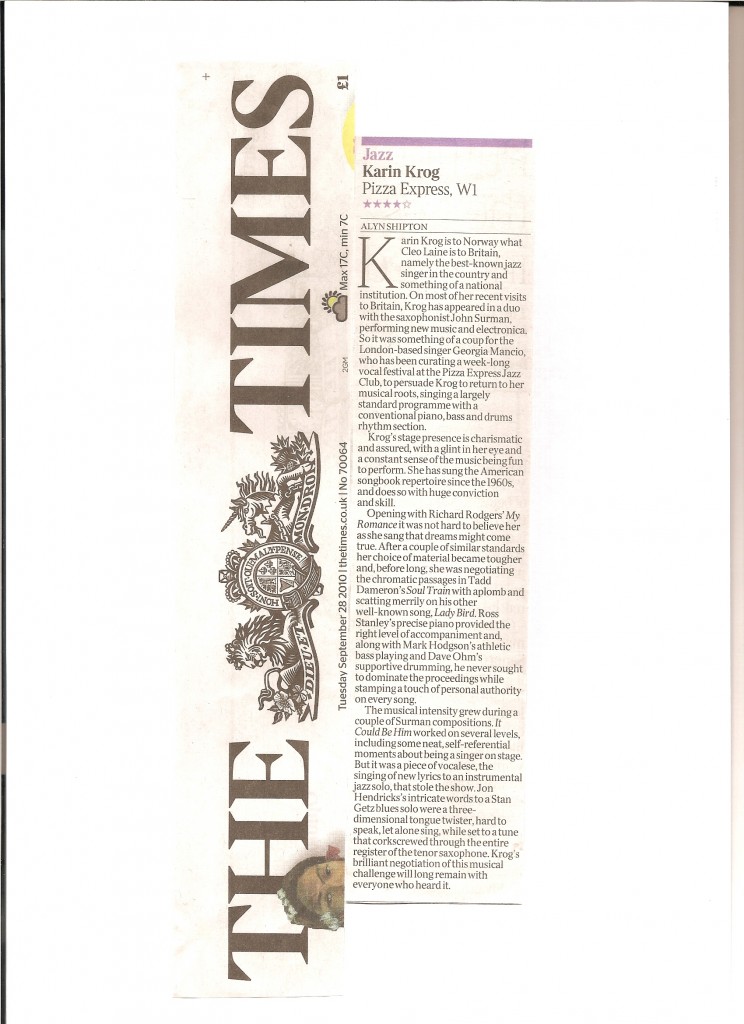 ” I honestly can’t remember the last time I saw a live performance in which two artists [Maria Pia de Vito and Huw Warren] were so completely attuned to each other, whether negotiating the trickiest unison passage or breezing through the catchiest Brazilian riff”

“Curated by the award-winning jazz vocalist, the first of a five-night mini-festival under the banner of ‘Georgia Mancio Presents’ reunited Italian vocalist Maria Pia De Vito and Welsh pianist Huw Warren. Performing material from their superb 2008 recording Diálektos, which explores their mutual love of jazz, Brazilian and Neapolitan music, I honestly can’t remember the last time I saw a live performance in which two artists were so completely attuned to each other, whether negotiating the trickiest unison passage or breezing through the catchiest Brazilian riff.
Huw Warren’s ‘And the kitchen sink’ set the remarkably high benchmark which was thrillingly sustained throughout the entire set. Employing scat, vocalese and a wild improvisational freedom, De Vito demonstrated why she’s one of the most versatile vocalists around. Composed by Italian pianist Rita Marcotulli, Warren’s muscular block chords in the Brazilian-infused ‘Miguilim’ provided the perfect foil for De Vito’s increasingly virtuosic flights of fancy. The song’s extraordinary centrepiece saw Warren beating out a primal rhythm on the piano’s strings and body. Throughout the album’s title track – a rich farrago of sounds, moods and emotions – De Vito was incredible to watch, gesticulating every movement of the melodic line with her hand as if conjuring spirits. Warren’s ‘Whistling rufus’ was a dazzling game that juxtaposed chunky Stravinskian ostinatos in the piano with skittering melodic unisons. In a magical encore, De Vito (who doubled here on the mbira) sang each word as if she was digging it out of the ground, such was its granitic power.
In a fine opening set that included ‘Moon Ray’, ‘Estate’, ‘Prelude to a Kiss/Charade’ and a brace of Rodgers and Hart songs, ‘Little Girl Blue’ and ‘Falling in Love with Love’, Mancio herself, accompanied by guitarist Nigel Price, demonstrated her perfect diction, beautiful phrasing and delightful chromaticisms.” 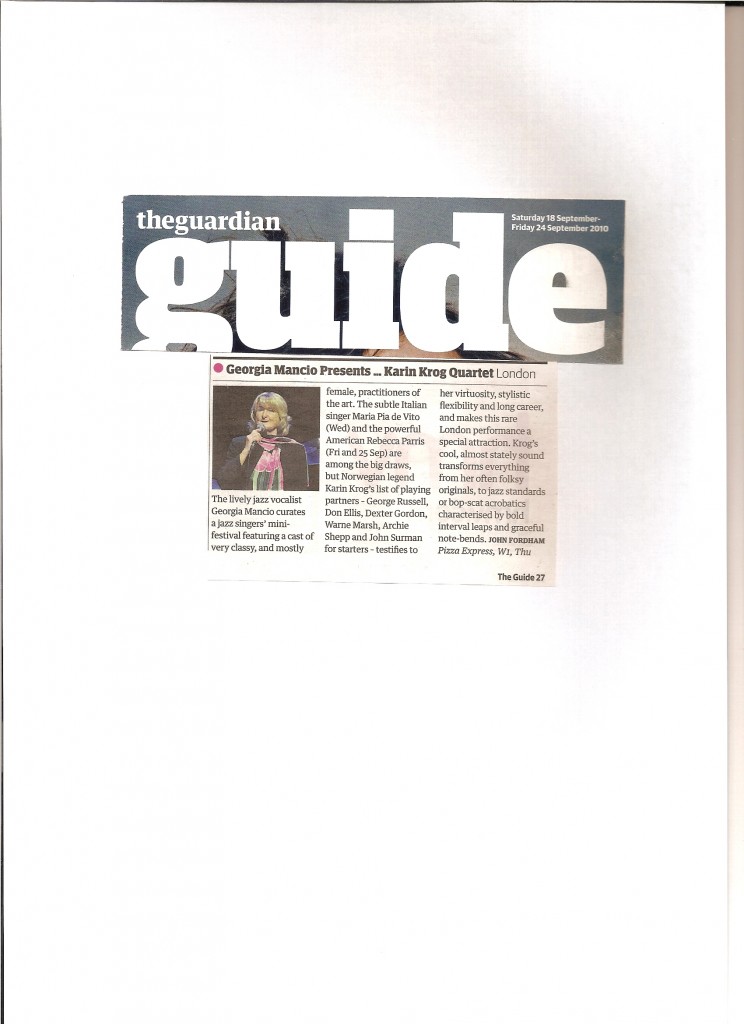 “The rise and rise of Georgia Mancio continues with the news that she has been asked to organise a week of dates from 22-26 September at Pizza Express in London’s Dean Street, for which she has lined up a programme of vocal talent from around the world” 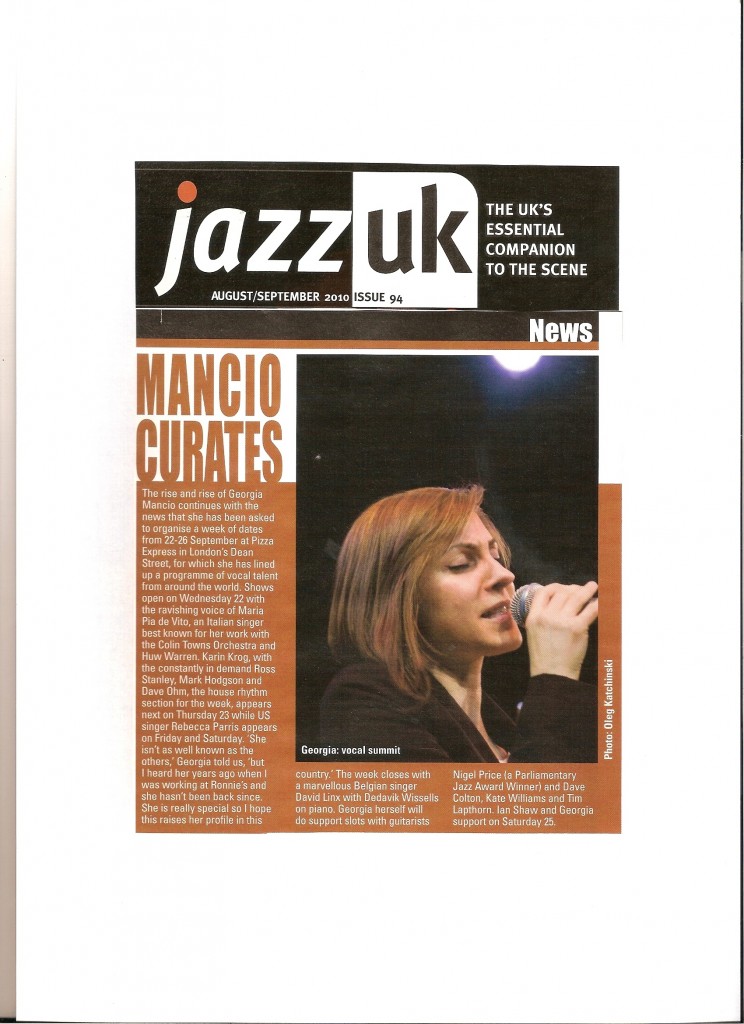